From “Thug State” Pariah to the NBJ’s Power 100 List

When an acquaintance comes to you because several people have shared that you can ‘fix’ their crisis…you might be good at what you do.

In the fall of 2015, Tennessee State University (TSU) had an on-campus issue. That same year, Vanderbilt had three times as many ‘issues.’ The difference, TSU is an HBCU. While crime was down, overall the year prior, there was a lot happening on higher education campuses [2015 TBI report].  One day in October, an incident occurred at TSU and a 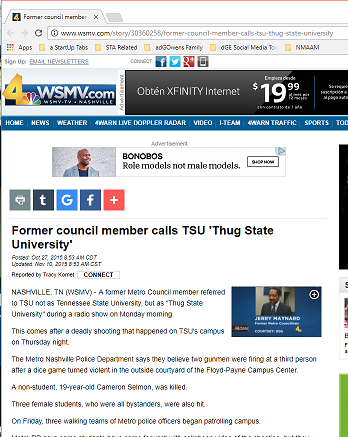 former Council Member made a comment that went viral. [in context, the comment could be viewed differently and if you listen to the entire thing, you can hear the beginning phases of a recommended plan; when edited to focus on the one phrase, it was a comment that absolutely went too far.]

At that time, the acquaintance went underground, for months, after receiving ridicule from the community and repeated negative coverage.

Coming up for air, mid 2016, the turmoil had quieted, heads were lifted and brows dried. And that’s when an acquaintance became a client and I built a strategy to repair his tarnished brand.

To do this (re-building a brand), successfully, there are steps that must be taken on both sides. The client must let go of his/her control over their personal brand…must listen, must bite his/her tongue and be willing to have hard conversations. I created a four point platform that created positive, consistent messaging:

It was great to see the tarnish disappear, on an unlikely subject. The only thing is you have to keep-up with polishing the silver (that’s another post, for another day).